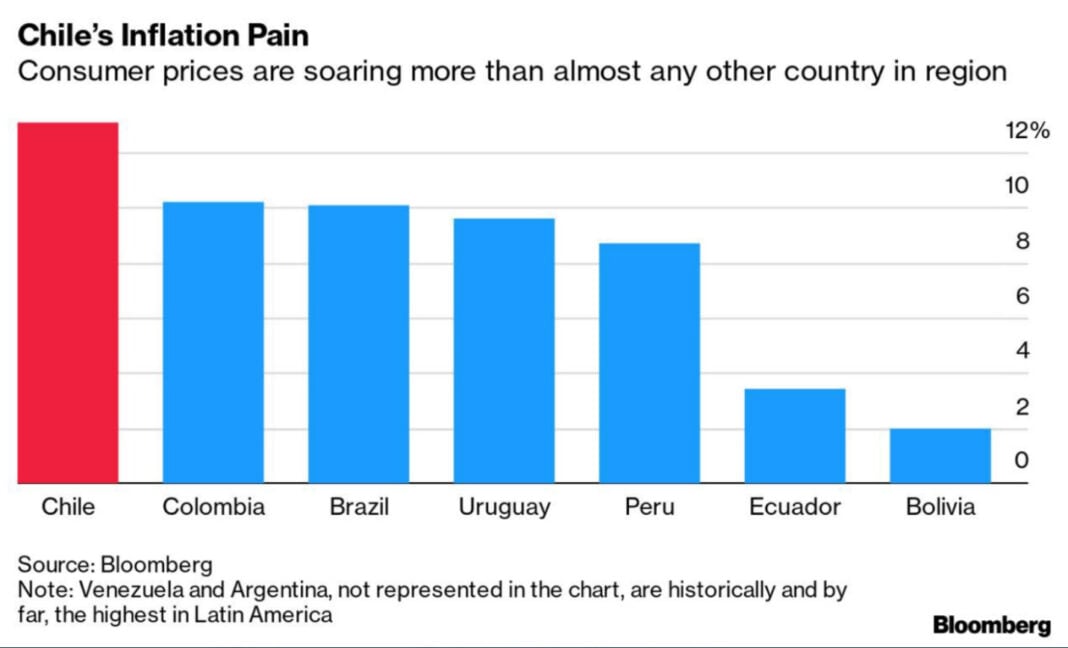 By: Gerelyn Terzo of Sharemoney

It’s no shock that economies around the globe are grappling with rising inflation this year, but Chile’s plight has hit especially hard. In July 2022, inflation in the South American nation climbed to 13%, its highest level in nearly three decades.

Chile’s main problems are two-pronged, comprising unwieldy inflation and a weakening currency, the peso. Now the International Monetary Fund (IMF) has stepped in with an $18.5 billion lifeline as the Andean nation seeks to navigate the recovery of its boom-turned-bust economy.

Last year, Chile’s economy expanded by an eye-popping 10.2% as it seemed to successfully navigate its recovery from the pandemic with the help of its vaccine rollout and a move to allow pension withdrawals. Chile’s economy also had the wind at its sails as the price of copper, its leading resource, was on the rise. However, these conditions did not last, and now Chile faces an uphill battle.

To grasp the challenges, inflation in the nation surpassed the rates of other economies in the Latin American region, including Colombia and Brazil, fueled by soaring energy prices and a tumbling peso. Chile managed to avert further decline by refusing a new constitution proposed by new President Gabriel Boric. The document was widely viewed as a danger to the ailing economy, and Chileans overwhelmingly voted to reject it.

While Chile certainly isn’t alone in combatting inflationary forces, it is a tough pill to swallow, considering just a year ago, its economy was thriving. However, the country’s loose policies during the pandemic era, among which it allowed its citizens to make withdrawals from their pension funds, have backfired. The IMF’s credit line could not come soon enough, citing a “marked increase in global risks” that threaten to derail the Chilean economy. 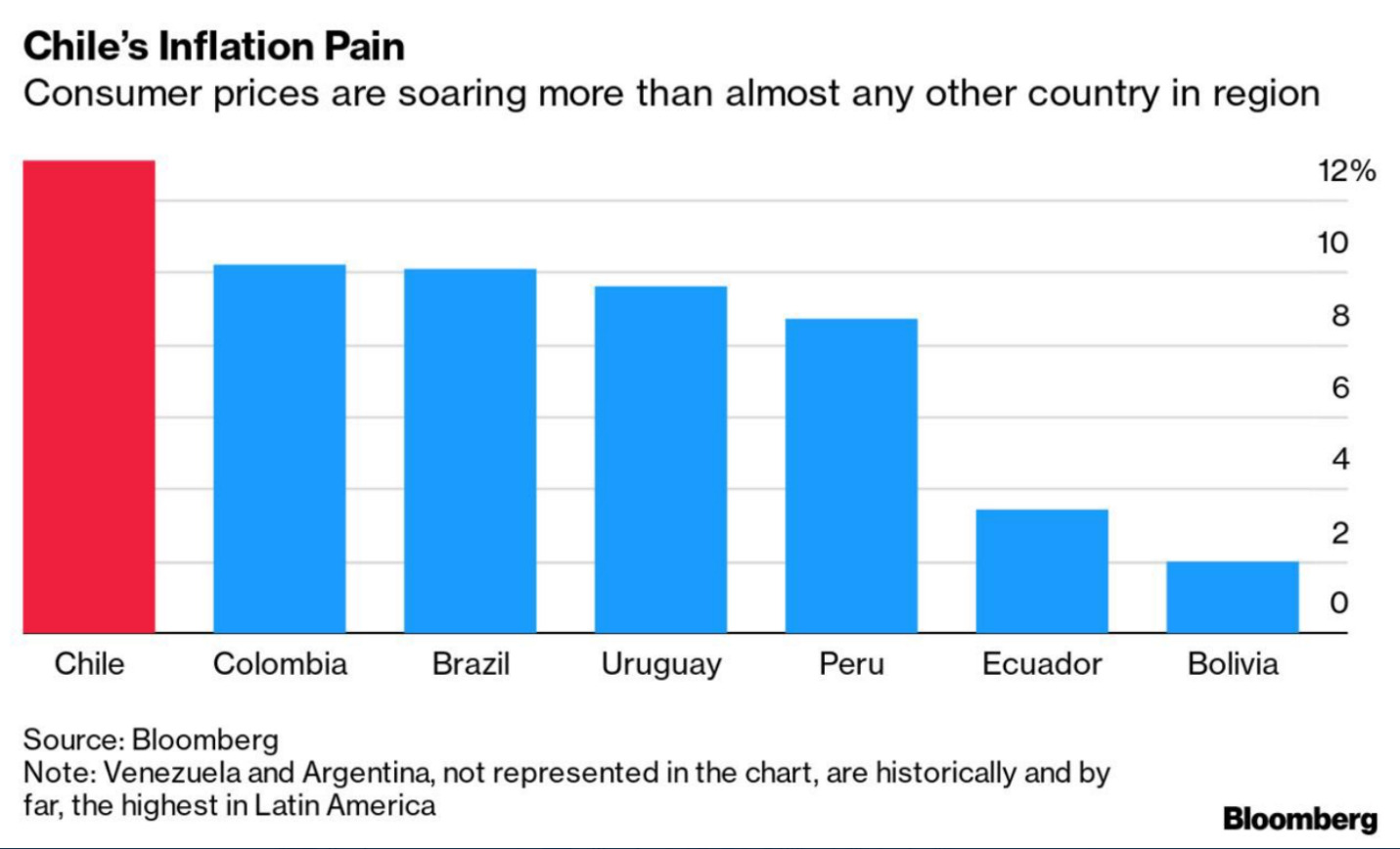 The IMF has greenlighted an $18.5 billion two-year Flexible Credit Line (FCL) for Chile, designed to “augment buffers” and “provide insurance against adverse scenarios,” according to a statement. Chile qualifies for the relief due to what the IMF described as “strong economic fundamentals” and “an impressive recovery” from the COVID-19 pandemic. Four months before this credit line, Chile gained access to a $3.5 billion credit facility from the IMF.

Meanwhile, Chile officials say they will treat the credit line as a “precautionary” measure. They hope to exit the agreement when pressures — both internal and external — ease. Some of those pressures, as described by the IMF, include:

Outside of the global macro conditions, Chile is facing severe internal headwinds. Among them, the nation is up against an export crisis in which supply chain issues have snarled produce deliveries. This year has been the most “complex fruit season of the last 25 years” for Chile, according to Minister of Agriculture Esteban Valenzuela.

The country has been having difficulty getting perishable food items such as grapes, blueberries, and apples to the Northern Hemisphere. In addition to the usual challenges, including drought, having enough workers, pest and disease control, and the foreign exchange rate, Chile has had to contend with a logistics crisis, Valenzuela said in a statement. He blamed the “convulsion of the pandemic and the war in Ukraine for the entire operation of logistics worldwide.”

Evidence of Chile’s export crisis hit home for Americans when fruit shippers could not get grapes delivered to the Delaware River fruit ports in a reasonable amount of time. Shipments took as long as 45 days, roughly twice the usual delivery time, causing Chilean produce companies to write off the losses. Chile also suffered record declines in its citrus exports amid drought conditions in the Coquimbo region.

Chile voters rejected the proposed constitution experts suggest would have wreaked havoc on the economy by a wide margin. Johns Hopkins Economist Steve Hanke on Twitter called the refusal of the rewritten constitution “good news for Chile’s economy,” saying that failure to do so would have paved the way for “economic ruin” in the South American nation.

The drafting of a new constitution came about due to years of unrest in the nation in which protestors demanded change around inequality and insufficient social programs. Among the features were universal healthcare alongside programs for housing, education, and pensions, all of which would have been funded by higher taxes for Chileans.

Comprising nearly 400 articles, the proposal left no stone unturned, even taking aim at the country’s vital mining industry, which in 2021 added 14.5% to GDP, the highest contribution the sector has made to Chile’s economy in over a decade. Copper and lithium mining operations were at risk of being severely disrupted due to harsh environmental regulations proposed in the constitution.

Analysts at Moody’s warned previously that this would have thrown a wrench into foreign investment in Chile’s mining sector, where major mining companies such as BHP, Anglo American, and Glencore have operations. Companies would not want to commit to long-term investments with uncertainty around the regulatory framework.

The policies threatened to leave much of Chile’s mining reserves, considered la crème de la crème, unexploited. For instance, a ban on mining around glaciers would affect as much as 25% of Chile’s copper production and the expansion of other projects. As it stands, Chile’s mining GDP was lower in Q2 2022, with no signs of relief up ahead.

Chile’s state-owned copper company, Codelco, the world’s largest copper producer, recently slashed its 2022 production outlook due to a string of fatal accidents that have stopped production in key mines. Copper prices this year are projected to hover at $4.19 per pound compared with previous estimates of $4.45. 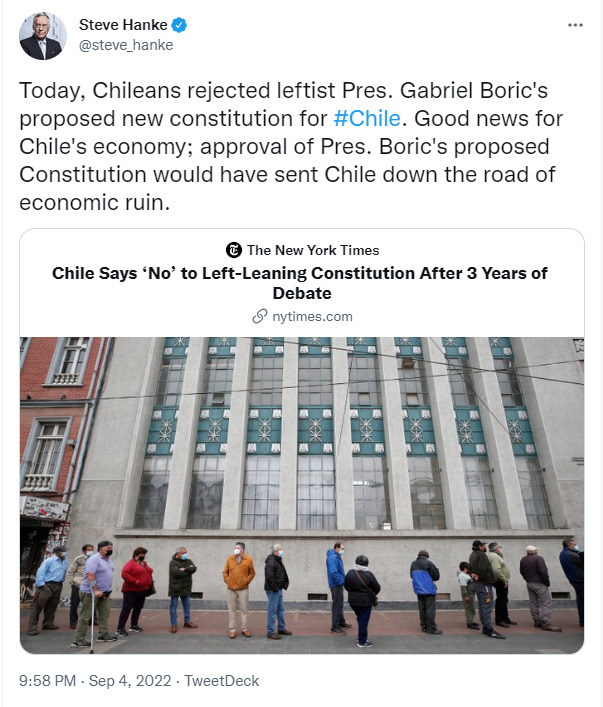 Meanwhile, President Boric, whose administration, including Chile’s constitutional assembly, was the architect of the proposal, says that officials will collaborate with Congress and the private sector to craft another version of the constitution.

Finance Minister Mario Marcel revealed that Chile’s GDP in 2022 will increase by 1.6%, which is below estimates from earlier this year calling for 3.5% growth. Economists forecast Chile will not be able to avert a recession in the current second half of 2022 as the local currency continues to weaken vs. the U.S. dollar.  According to Andres Abadia, chief Latin America economist at Pantheon Macroeconomics, Chile’s economy is already technically in a recession after contracting in Q1 2022, while leading economic indicators and consumer confidence show that the downtrend may persist for the foreseeable future.